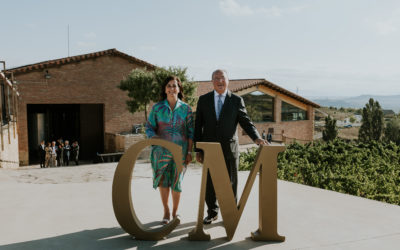 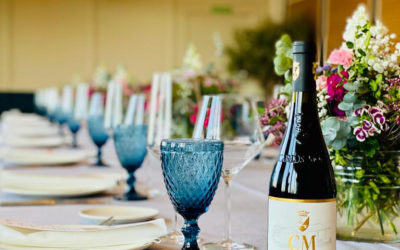 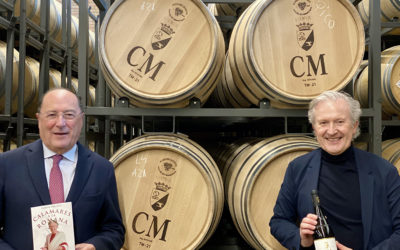 region under Carlos Moro’s leadership, one of the most respected winemakers.

Located in the town of San Vicente de la Sonsierra, in the heart of Rioja Alta, this winery aims to become a wine benchmark in a region where excellence and quality are essential signs of identity, both for its production methods and renowned wines.

This Designation of Origin is a well-respected business card for quality Spanish wines all over the world, given its history, tradition, quality and market share.

The DOCa Rioja is a reputation badge that Bodega Carlos Moro earned after a long process of analysis and implementation. Several years of prospecting, work and search for excellence terroirs led this winery to the municipality of San Vicente de la Sonsierra with the mission of creating a new hallmark in the

in the wine and winemaking industry at the national level for his prestigious wines and commitment to the innovation, sustainability and diversification of Bodegas Familiares Matarromera.

The foundation of San Vicente as a villa dates back to 1170, when the King of Navarre Sancho VI ‘The Wise’ ordered the construction of a castle (which is part of the stretch between Laguardia and Labastida on the border between the Kingdom of Navarre and the Kingdom of Castilla).

Curiously, he commissioned this work to Ferrant Moro, who was in charge of managing the work. In 1172, Sancho ‘The Wise’ granted a charter to the villa of San Vicente de la Sonsierra, making it a royal villa that developed in the surrounding areas of the fort.

WHO IS CARLOS MORO?

Carlos Moro is a winegrower and winery owner with a passion for wine, and love for the land and the vineyard. He spent his childhood among his family’s vineyards in Olivares and Valbuena de Duero, in the heart of the Ribera del Duero’s Golden Mile, a fertile soil for his distinct intuition for wine, his sense of duty and work well done, guided by an infinite love for the land. These vineyards laid the foundations of what Bodegas Familiares Matarromera is today.

Agronomist Carlos Moro was born during the vintage of 1953. He holds a Master’s degree in Agricultural Engineering in oenology and viticulture, and he studied business and SMEs Economics and ICTs in Madrid, where he also worked for the Ministry of Agriculture, the FAO, FIAB during the 80’s… and collaborated with MINER and Airbus. In 1988, he decided to go back to his roots and make true his own dreams by founding Bodega Matarromera in Valbuena de Duero, followed by instant international recognition when he was awarded the Best Wine in the World award. After Matarromera, eight additional wineries were created, such as Valdelosfrailes in 1988 right at the heart of the incipient Designation of Origin Cigales or Renacimiento winery, a small cult winery along the riverbanks of the Duero river set in a 16th Century manor house, a former Jesuit Convent previously owned by the Marquis of Olivares.

In 2005, the birth of the Emina Winery in Valbuena de Duero revolutionized the national wine scene, since the spectacular winery with avant-garde architecture was complemented with the Wine and Duero Museum created in a resort that catapulted Emina as the great wine tourism benchmark in Castilla y León and Ribera del Duero.

Cyan Winery in the DO Toro make up a range of wineries, also including Oxto, a small company dedicated to the making of fortified wines or Win, the range of alcoholic-free wines.

In 2014, the Oliduero oil mill was created in Medina del Campo, while Bodegas y Viñedos Carlos Moro was incorporated into the DOCa Rioja, in the Rioja town of San Vicente de la Sonsierra. In 2019, the Casar de Vide winery in Castrelo de Miño joined the group.

The winery is located in the heart of the DO Ribeiro, the oldest in Galicia, and aims to become a wine benchmark in the region.

All its facilities have been built in a sustainable and efficient way, always respecting the surrounding environment. As a result, it received the European Environment Award from Their Majesties the King and Queen of Spain in 2012.

His constant commitment to research and development has been endorsed on multiple occasions, such as the National Research Award granted by the Ministry of Economy and Finance of Spain handed by King Felipe VI himself in 2016, and the Wine Tourism Merit Award granted by ACEVIN (Spanish Association of Wine-Producing Towns and Cities) in 2020.

BODEGA CARLOS MORO is a winemaking project led by the passion of a winegrower, oenologist and winemaker who has successfully made his mark in other equally demanding and prestigious designations of origin.
This exciting work is driven by a team of oenologists who are responsible for selecting a collection of excellent hamlets on the left bank of the Ebro River with its epicentre in San Vicente de la Sonsierra.
The winery has a 150-metre underground wine cave with a capacity for 2,000 barrels, which promotes a natural and homogeneous ageing in barrels.
More vertical systems which are gentler with the grapes have been selected thanks to the passion and viticultural knowledge of the winery’s entire winemaking team, including gravity-flow systems that facilitate both alcoholic fermentation processes and malolactic fermentations in high thermal inertia tanks, such as the classic concrete tanks.
This winery is the backbone between two communities, between two rivers (the Duero and the Ebro) that flow into the same destination, despite doing it in different directions: a market accustomed to wines with high standards and excellence. This is the Riojan winery’s main and noble aim, which is pursued with humility, simplicity and professionalism.

IT WAS WELL WORTH THE WAIT. YOU CAN ENJOY OUR WINES WITH RIOJA´S SOUL AND DISCOVER THE EXCELLENCE OF CARLOS MORO WINES IN OTHER APELLATIONS OF ORIGIN

WINE WILL NEVER BE THE SAME

The winery will also be opened for wine tourism, becoming a close and accessible reference for visitors and tourists, in a region used to promoting wine culture for decades.

The winery will have a grape variety garden, wine bar, tasting room and glass elevator to view the production process.

YOU CAN USE THE CONTACT FORM IF YOU WISH TO CONTACT US.
WE WILL REPLY AS SOON AS POSSIBLE.